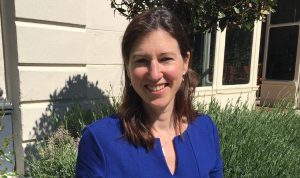 Hermione Gough worked for the last five years as Minister Counsellor in the British Embassy in Paris. She led the EU and Global Issues section of the Embassy covering EU affairs, economic relations, migration and security.

Can you first please briefly go through your education and career?

I studied Economics at university, including a paper on “West European politics” (which ages me!) that I enjoyed and led to me applying to do a stage in the European Commission when I graduated, alongside applying to join the UK Civil Service. So I spent the first year of my career in Brussels as a stagiaire in the Cabinet of Sir Leon Brittan, then Commissioner for Trade, before returning to London to join HM Treasury. I have been a civil servant ever since, working in a variety of roles and Departments, frequently covering European policy and international economic issues but also with a stint at the Department for Education.

While I was at the Treasury, I had the opportunity to work for the Chancellor of the Exchequer, Gordon Brown, in his private office (equivalent to a French Ministerial cabinet). That was a fascinating experience. When I left private office, I wanted to do something very different so I applied to the Ecole Nationale d’Administration (ENA) as an international student. I was in the Promotion René Cassin, a year before Emmanuel Macron – had I been there a year later he would have been one of my camarades de promo!

I stayed in Paris at the end of my ENA course and spent a year at the French Direction Générale du Trésor, an excellent way to consolidate my ENA links and make new friends who I then found myself working with when I returned to the Treasury in London. I spent the next few years continuing my career in Whitehall, but always wanted to come back to Paris so when the opportunity to work at the British Embassy as Minister Counsellor arose, I jumped at the chance. I’ve been here since 2013 and have another year to go.

When did your connection to France start? Did you speak French before moving to Paris to study at ENA?

It was my time at ENA that did it for me. We went on holiday to France when I was growing up and I learnt French at school but it was never a particular focus for me. I also spoke French a bit when living in Brussels – but you can get by quite effectively there without good French. So my French wasn’t all that good when I arrived at ENA but there is nothing like being thrown in at the deep end. I found myself doing my ENA stage in the Préfecture of Haute-Savoie and learned to adapt and get by quite quickly. It was also my time at ENA that led to the affection and interest that I have in France. I made some very good friends there, and it was a great way to get under the skin of how France really works.

You are the President of the UK ENA Association. What does ENA represent for the relationship between the UK and France?

Brits have been going to ENA since the 1970s as part of the group of overseas students that make up around a third of every promotion, and we welcome French ENA students to do their stages in UK Government Departments in London. It is an important link that helps build mutual understanding – and a very useful network. I say to colleagues who are thinking about applying for ENA that it is not about what it is going to bring in the two or three years after you have done the course, but what it is going to bring you throughout your career. The UK ENA Association is for the British énarques – all people who have invested part of their time and career working closely with France – and our aim is to keep those links alive, including with the French ENA alumni association. We have also set up the “UK France Policy Network” on Linkedln, which is open to anyone who is interested in the UK-France policy environment. I think it is really important, particularly with negotiations starting on the Britain exiting the EU, to make sure that we sustain these relationships.

In what sector is the Franco-British synergy weak? Where is Franco-British cooperation the strongest? In which specific sectors should the bilateral relationship be intensified?

France and the UK are complementary across a whole range of subjects: we are two countries of a similar size in terms of population and in terms of our GDP, we are both very engaged internationally and have similar levels of ambition to act for the good and drive change. For example, we are both permanent members of the UN Security Council, have highly developed research and development and scientific traditions, believe in investing in skills and education for the long term and are really engaged in international development and climate change. I think there is a huge amount of complementarity in terms of our global reach and when the UK and France act together, we can have a really strong impact. I think that has been important in the past and remains incredibly important for the future. There are a lot of examples where the Embassy can play part, spot the opportunities and facilitate that joint work.

What changes do you foresee in the UK’s European diplomatic strategy in the post- Brexit context?

The fact that the UK will be leaving the EU doesn’t mean that we are leaving Europe we will still be France’s neighbour, friend and strategic partner. As well as wanting to have a really strong relationship with the EU in the future, we’re very focused on our bilateral cooperation with France. We have also been working on a new programme, launched by the Duke and Duchess of Cambridge when they were in Paris in February, called Les Voisins, which aims to draw attention to the human and cultural ties between the UK and France, which we have possibly taken for granted in the past. It now feels like it’s a good time to celebrate those links.

Franco-British Defence Cooperation is very strong. Do you think France and Britain can still talk of a defence culture in Europe? What value can the partnership add in the fight against terrorism?

Security and defence are two very important areas of Franco-British cooperation. We have very close bilateral links under the Lancaster House Treaty which will absolutely continue in the future alongside what we hope will be a very strong partnership between the UK and the EU. That is something that President Macron and our Prime Minister reaffirmed when she visited Paris in June. That doesn’t mean it isn’t also important that EU partners increase their focus on defence – but the UK and France have the biggest defence capability and it is a relationship that is to the benefit of everybody, particularly at a time when are all facing significant security and foreign policy challenges.

Whilst working for the Ministry of Education you coordinated a programme to steer young people away from radicalisation. Can you talk about it a little, given the continuing challenges of radicalisation in France and the UK?

I worked at the Education Ministry in 2007, setting up a new team to work with local partners to try to support young people who are vulnerable to radicalisation. It was a programme that we set up following the terrorist attacks in London in 2005. The fact that people who had grown up and been through the British school system had become terrorists caused a lot of food for thought as to what we should do to try to prevent radicalisation. It meant going around Britain talking with local authorities, police, and community organisations to try to understand what caused young people to be attracted by extremism and what could be done to about it. It was fascinating.

It is true that it is now an issue in both France and Britain. At the time when we spoke to French colleagues it was not an issue on the government’s radar. Of course now the situation here is very different and we have a really rich bilateral dialogue and cooperation around sharing ideas, examples and experiences of how to work with young people. There is no easy answer. Alongside more specialist support, it is important to confront the extremist narrative. It is also important for teachers in school to help all young people to be more resilient through learning to think for themselves.

In a previous interview you mentioned that tarte tatin is your favourite dessert. Have you changed your mind? Do you consider yourself a Francophile?

I am definitely a Francophile. There are a lot of things that my family and I love about the French culture. I think France has a wonderful balance in terms of appreciating the good things in life. I like the fact that food is a valued part of the French culture. Tarte tatin is a particular favourite. Has anything changed? No, I don’t think it has. We were given a tarte tatin dish as one of our wedding presents. I continually have good intentions of trying to improve my own tarte tatin cooking skills but I am certainly no expert!